PJGA Statement on the «Madeleine Foundation» 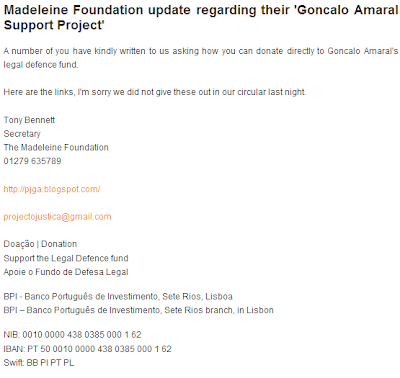 As of 12 June 2010 no donations made by Mr. Anthony Bennett or by the «Madeleine Foundation» had arrived to the ‘Citizens for the Defence of Rights and Freedoms - Project Justice Gonçalo Amaral’ PayPal account or Bank Solidarity account.

Whatever Mr. Bennett is claiming, and the recent «Madeleine Foundation» proposals (click on the left image to read) are not supported in any way by the ‘Citizens for the Defence of Rights and Freedoms - Project Justice Gonçalo Amaral’ nor by Mr. Gonçalo Amaral.

The unauthorized use of the PJGA's Legal Defence Fund details by the «Madeleine Foundation» and/or by Mr. Bennett as if that organization and/or individual partakes with the ‘Citizens for the Defence of Rights and Freedoms - Project Justice Gonçalo Amaral’ is undesirable and unwanted.

«The book “Maddie: A Verdade da Mentira” was subject to an injunction that sought not only the suspension of sales of the book and the DVD that was based on it, but also of any and all divulgation of the thesis that is defended by Dr. Gonçalo Amaral, author of the book and former Judiciary Police coordinator, about the ‘Madeleine McCann’ case.

Through this action, a ban was imposed not merely on the written work, but on an entire line of thought: the expression of an opinion, based on the facts of a police investigation; a rational, responsible, mature decision.

Nonetheless, said injunction was merely the tip of an iceberg. In the main action that it refers to, Madeleine’s parents seek to extort the sum of 1.2 million Euros from Dr. Gonçalo Amaral – an astronomical amount that is out of any proportion, both legal, and ethical.

A second injunction succeeded in apprehending belongings and professional income from the defendant, stifling his capacity to respond in financial terms, given the fact that judicial and process costs are indexed to the value that is demanded through the main action. In this manner, stripped of his freedom of expression and economically asphyxiated, the siege on a Man who, at huge personal and family cost, seeks nothing more than the reopening of a judicial process, in order to conclude an investigation that so many consider has been cut off halfway through, closes in.»

The Legal Defence Fund/Solidarity Account was constituted to support Gonçalo Amaral in his struggle to regain his inalienable Right to Freedom of Expression as consecrated in the Portuguese Republic’s Constitution exclusively through the payment of judicial expenses and whenever it is proved necessary.

Cheques or donations made out personally to Gonçalo Amaral and/or to his family members are not accepted, and will be returned.

Financial resources that are deemed excessive in the future will be delivered to a social institution, dedicated to support children in need.